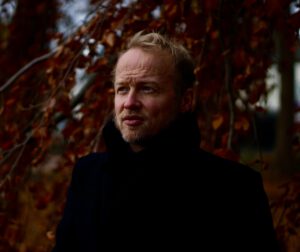 Diederik Nomden has been active in the Dutch music scene for over 2 decades. In the late nineties, he started his first band called Redivider, with whom he won de ‘Grote Prijs van Nederland’.
After leaving the band, he spent most of the 00’s playing guitars, keyboards and singing backing vocals with top indie bands Johan and Daryll-Ann.
Subsequently, Nomden got hired by artists such as Ellen ten Damme, Bertolf and awkward i.

In his years functioning as a musical companion to all these artists, he’s seen every club and played every main festival in The Netherlands. With some of them, he toured Germany, Denmark, Canada and
the USA. As all good things come to and end, Nomden eventually decided to embark on a solo adventure. In 2012 he released his debut album ‘Royal Parks’, from which the single ‘She’ received a bunch of
airplay on Dutch national radio.

Plans for a second album came to a halt after Nomden decided to join as a lead singer, guitarist and keyboardist in a promising new Beatles-tribute band called The Analogues,
Success came quickly for them, and the next couple of years would be filled with sold out tours
throughout The Netherlands, Germany and the UK.

Moreover, Nomden played a major role as one of the lead singers in CSNY-tribute band Her
Majesty, with whom he has been succesfully touring The Netherlands since 2016.
Despite his busy schedule, Diederik did find the time to write, play, record and produce another
album. ‘Wingman Returns’ was released early 2019, and, like its predecessor, was well reviewed by
the press.
At this moment, Nomden is busy writing his forthcoming album ‘Parallel Universe’, which is due to
be released late 2021.